There are two main approaches for the development of SQL databases:

The idea of the transformational approach is based on database migration from one state to another. After first production release, we will assume that database has its the first state. This state is the starting point for further migrations.
Why do I think that the starting point for migrations should be the first production release? The answer is simple. While the application has not gone into the production stage, it does not make much sense to try to save entered test data. Keeping data complicates development and testing process on earlier stages of project delivery. In this case, it is better to re-create the database each time and insert reference and test data into it.
The diagram below describes the migration-based approach:

In this method, developers concentrate on writing migrations (M1, M2 .. Mn) from one database state to another (S1, S2 .. Sn). There is a good example of this approach. It is EntityFramework's migration mechanism. For more information, you can navigate and check MSDN article https://msdn.microsoft.com/en-us/library/jj591621(v=vs.113).aspx.

This approach is based on the following paradigm: developers have to maintain the most current snapshot of the database structure. What does it mean? The most convenient way to explain this is to analyze the following example. Let's assume that we have the table below:


At some moment product owner decided to add one more property to the People table. In migration-based world in this particular scenario developer has to create migration script with ALTER TABLE Statement, but in state-base world we need to follow it's the main paradigm, so we need to update table creation script with a new column. Please see below. 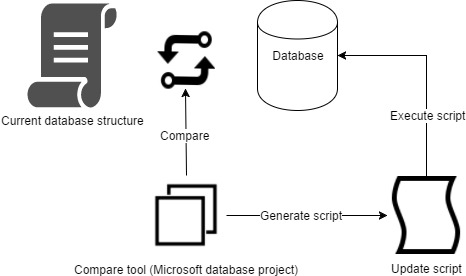 Microsoft Database project and tools inside of it will be trying to sync the database with current database script. For more info about Microsoft Database Project use https://msdn.microsoft.com/en-us/library/xee70aty(v=vs.100).aspx link.

What approach to choose?

It is difficult to say which approach is better or worse for a particular project. Next, I will give some advantages and disadvantages of each approach, which in my opinion play a key role in the choice of the mechanism for developing a database on the project. And you can decide what is the best for you.

Posted by Aliaksei Maniuk at 8:08 AM